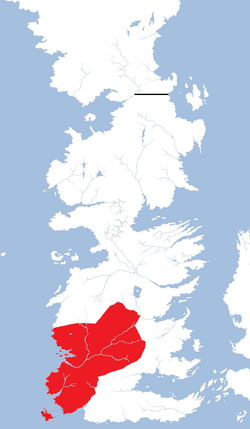 The Reach is the most fertile part of the Seven Kingdoms, consisting of vast grassy fields and plains watered by numerous rivers (most notably the mighty Mander). It is large and populous, and House Tyrell can field the largest army on the continent and equip it superbly.

Two main roads cross the Reach, linking the Reach with Crownlands and Westerlands, at King's Landing by the Roseroad and Lannisport by the Ocean Road.

The three main cities in the Reach include Highgarden, the center of regional power run by House Tyrell. Two other prominent cities are Oldtown and Ashford.

The Reach is one of the wealthiest regions in the Seven Kingdoms, second to the Westerlands. The land is very fertile. The region produces peaches, apples, grapes, melons, and fireplums. In addition, they make fine wines, ranging from dry reds to rich golden vintage wines.

Bastards born in the Reach take the surname 'Flowers'. House Tyrell run the region of Highgarden.

Retrieved from "https://iceandfire.fandom.com/wiki/The_Reach?oldid=21669"
Community content is available under CC-BY-SA unless otherwise noted.