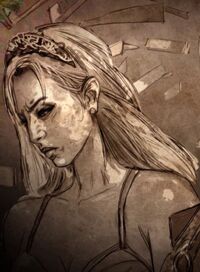 Rhaella Targaryen was the sister-wife of Aerys II Targaryen and the mother of Rhaegar Targaryen, Viserys III Targaryen, and Daenerys I Targaryen. She died during childbirth with Daenerys.

She was not happy to marry her brother Aerys II Targaryen but did it due to the command of their family. They had a very bad marriage, and Aerys II Targaryen would only sleep with her after just having executed someone by burning, which aroused him perversely. He regularly abused her.

Retrieved from "https://iceandfire.fandom.com/wiki/Rhaella_Targaryen?oldid=23619"
Community content is available under CC-BY-SA unless otherwise noted.