A Song of Ice and Fire Wiki
Register
Don't have an account?
Sign In
Advertisement
in: POV Character, Characters, Maegi,
and 5 more

Melisandre is a shadowbinder and red priestess of R'hllor from the distant country and city of Asshai, acting in the service of King Stannis Baratheon. She is also a priestess of the Lord of Light or Red God, R'hllor. She was sold into slavery as a child. Her name was once Melony.

Melisandre was the POV character in A Dance with Dragons Chapter 31.

Melisandre is a woman of almost terrible beauty. With a mane of dark red hair and pale skin, Melisandre is tall, slender and full-breasted, with a narrow waist and a heart-shaped face. Her voice is deep, with an Eastern accent, and she is rarely ever seen not dressed in flowing red robes. Those who are not entranced by how beautiful she is are very frightened of her. She is never seen without a red-golden choker around her neck.

Melisandre appears to be an extremely powerful individual who can see visions in the flames, and gives the impression of somebody who knows the will of R'hllor, though she admits that nobody can truly know his will in full as she can only see what the Lord of Light allows her to see. She is completely confident in the Lord's power, to a fearsome extent. She is generally serene, dark and mysterious, described as terrible by Maester Cressen. She is capable of anticipating moves made directly against her, but there are certain limits to what she can see. Melisandre is clearly intelligent enough to manipulate other people's perspectives in her favour, so that she remains in a certain position of power.

From the one time in the series her perspective is shown, Melisandre appears to be an insecure individual with a mysterious past and a fear of the darkness that apparently awaits everyone.

According to Melisandre, her ultimate goal is to ensure the victory of R'hllor over the Lord of Darkness and Cold, the Great Other, whose return will be heralded by a deep and lengthy winter. Melisandre has the ability to see visions of the future in fire, and concluded that Stannis Baratheon was Azor Ahai reborn, the man prophesied to lead the victory over the Others in this war. To do this he must become the King of Westeros.

After Stannis' defeat at the Battle of the Blackwater, Melisandre claims to have arranged the deaths of Robb Stark, Joffrey Baratheon and Balon Greyjoy through her magic, although the truth of this is uncertain. Melisandre sees that Davos is plotting to kill her and has him arrested. Davos is freed, but then he arranges the escape of Edric Storm who is one of Robert Baratheon's bastards and who Melisandre wishes to use in one of her blood sacrifices. When Davos Seaworth discovered a long-forgotten message from the Night's Watch begging for aid and warning of unusual events happening beyond the Wall, Melisandre realised this was the beginning of the true struggle and convinced Stannis to sail for the Wall with his remaining strength to prosecute the war from there.

Despite claiming benign motivations, Melisandre is viewed with suspicion from some, due to her extreme ruthlessness. She tries to warn Jon Snow that he is in danger, but he disregards her advice. 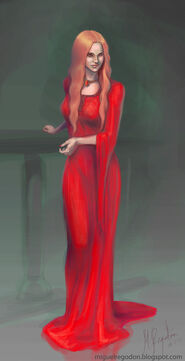 By miguelregodon
Community content is available under CC-BY-SA unless otherwise noted.
Advertisement