Aegon of the House Targaryen, the Sixth of His Name

King of the Andals, the Rhoynar, and the First Men (claimant)

Lord of the Seven Kingdoms (claimant)
Protector of the Realm (claimant)

With influence from the Andals and the Free Cities

King Aegon Targaryen, also known as Young Griff, and self-proclaimed Aegon VI Targaryen, though the succession line of the Iron Throne doesn't recognize this, is the son of Elia Martell and Rhaegar Targaryen. He was supposedly killed by Ser Gregor Clegane during the Sack of King's Landing in Robert's Rebellion, but it is revealed that, supposedly, this was not the case.

Aegon had been under the watch of Lord Jon Connington, with his hair dyed blue to hide his telltale Targaryen hair. Tyrion Lannister later finds out about his true identity.

Currently leads the Golden Company in an invasion of the Seven Kingdoms, where he has taken several lands in the Stormlands, and plans to lay siege to the Baratheon seat of Storm's End.

Given Aegon's parentage, in actuality, he has a better claim to the Iron Throne than any other character, even Daenerys Targaryen. However, this is all assuming that Aegon is who he claims to be, and not a pretender. 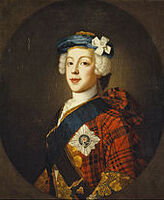 Bonnie Prince Charlie
Add a photo to this gallery
Retrieved from "https://iceandfire.fandom.com/wiki/Aegon_Targaryen_(son_of_Rhaegar)?oldid=22964"
Community content is available under CC-BY-SA unless otherwise noted.