A Song of Ice and Fire Wiki
Register
Don't have an account?
Sign In
Advertisement
in: Historical characters, Kings, House Targaryen

King of the Andals, the Rhoynar, and the First Men
Lord of the Seven Kingdoms

With influence from the Andals

Faith of the Seven

{Aerion Targaryen} (as Lord of Dragonstone)

{Aenys I Targaryen} (as King of the Andals, the Rhoynar, and the First Men)

King Aegon I Targaryen, often called Aegon the Conqueror, was the first king to sit on the Iron Throne and the first king of the unified Seven Kingdoms of Westeros. He was the brother and husband to his sisters Visenya and Rhaenys, and father to Aenys I and Maegor I. He lived three hundred years before the events of A Song of Ice and Fire.

Aegon Targaryen was born on the island of Dragonstone,[5] an outpost of the Valyrian Freehold which his family had controlled since its settling a century before the Doom. Aegon took both his sisters, Visenya and Rhaenys to wife in the Valyrian tradition. During Aegon's rule of Dragonstone, it became known in the Free Cities that he controlled three dragons, Vhagar, Meraxes and Balerion the Black Dread, and the city of Volantis petitioned for his intervention in the Bleeding Years, the series of wars that ravaged the cities in the wake of Valyria's collapse.[6][3]

Aegon considered his options carefully, but his instinct was to go west to Westeros and conquer lands there.[3] He had a huge map of Westeros carved out of wood, the Painted Table, showing every bay, inlet and mountain, but no borders. His plan was to unite the continent under his rule.[7]

Aegon's assault on the mainland was ambitious but eventually successful. He deployed his limited assets carefully and was quick to make alliance with local forces wherever possible, such as his treaty with House Tully, which triggered an internal rebellion within the Riverlands against the ruling ironborn of House Hoare, resulting in their defeat and later surrender.[3]

Aegon converted to the Faith of the Seven during or before the invasion, winning the support of the High Septon in Oldtown for his piety, even though he refused to renounce the Valyrian practices of incest and polygamy.[8]

Aegon eventually conquered six of the kingdoms of the Westeros continent and established the Riverlands as a separate region. He failed to conquer Dorne, even using his dragons, and was eventually forced to respect their autonomy. He first decided to try and bring Dorne under the rule of the Iron Throne through diplomacy. However, after a year of negotiations and no progress, Aegon decided to take Dorne by force.[8] He led the First Dornish War in 4 AC.

However, the war proved only horrible as it cost the sword hand of Orys Baratheon. However, Aegon faced his greatest loss; the death of his queen Rhaenys after she and Meraxes were shot down by a scorpion bolt. An enraged Aegon and Visenya took to their own dragons and burned any Dornish stronghold in their sights for two years, known as "Dragons' Wroth", as Aegon's desire for vengeance for his wife knew no limits.[9]

Aegon and Visenya placed bounties on the heads of Dornish lords after Rhaenys's death. In turn, the Dornish put bounties on the Targaryens. Aegon and Visenya were assaulted on the streets of King's Landing and if not for Visenya and her valyrian steel sword, would have been killed. This attack led to the forming of the elite royal bodyguard known as the Kingsguard in 10 AC. Visenya chose the men herself.[4] The First Dornish War came to an end in 13 AC after a visit from Princess Deria Martell, the daughter of Prince Nymor Martell, the ruling Prince of Dorne. She brought the skull of Meraxes and a letter with her, which was given to Aegon. After reading the letter, Aegon burned it and flew on Balerion to Dragonstone. He returned the next day, and agreed to peace between Dorne and his kingdom, withdrawing all his forces from Dorne.[9]

Aegon founded the city of King's Landing and the fortress of the Red Keep at the site of his initial landing on Blackwater Bay. He had the Iron Throne forged out of the swords of those who surrendered to him. His later life was spent in peaceful rule and order of the realm before his death in 37 AC.

Although Aegon I appears to have been a successful ruler, it appears that there was a belief that upon his death the realm would splinter apart and a return to the old independent kingdoms would take place. When this did not happen, there was rebellion and war that took a generation to put down.

Aegon's principal legacy was ensuring that Westeros was considered to be a single land without borders or division, and it could be ruled through strength of arms, will and character, a belief that became so successfully ingrained in the people that even when the dragons had all died out and the realm splintered by several more civil wars, the belief in the authority of the Iron Throne would remain strong.

Aegon I Targaryen was clearly ambitious, driven and willing to take enormous risks with his forces. He seems to have been a skilled general, winning battles even when he did not deploy his dragons, and a canny and charismatic negotiator, winning several houses, cities and even the Faith to his cause without the need for violence, despite mainland disapproval of his incestuous and bigamous marriages, and his worship of the Valyrian gods. He was a very reserved man, with only his sister-wives and his Hand Orys Baratheon truly having his trust or his love. Aegon I was clearly a strong unifying force that his sons were not, as they had to contend with a significant rebellion following his death, and Maegor, in particular, faced endless rebellions throughout his reign, whereas Aegon barely suffered a revolt after the First Dornish War. Aegon I had a reputation as a formidable warrior.

Aegon was the prototypical Targaryen, being tall, broad-shouldered, athletic and powerful in appearance with purple eyes and silver-gold hair. He was charismatic, brilliant, decisive and commanding. He cut his hair short, not letting it grow past his ears, possibly for the purpose of combat practicality. During the Conquest, he typically wore a shirt of black scales into battle and wielded the Valyrian steel blade Blackfyre in combat. His crown was a simple circlet of Valyrian steel, emblazoned with large, square-cut rubies. The one man known to exceed his height is his son by Visenya, King Maegor Targaryen.

Aegon is better remembered for conquering the Seven Kingdoms than he is ruling it. As a warrior, he was essentially unmatched in his own right, and he was capable of being completely ruthless when pushed. His famous destruction of Harrenhal is one of the greatest and most terrifying triumphs in the history of House Targaryen, if not in Westerosi history: his parting words with Harren the Black were "When the sun sets, your line shall end" and he then obliterated House Hoare entirely, along with anyone else inside the castle, by flying Balerion over the castle and incinerating it, proving that a keep as strong as Harrenhal, contrary to Harren's boasting, was no match for just one of his dragons. Aegon was one of the greatest warriors of his time and was never known to be defeated in single combat by another man - wielding his family's ancestral sword Blackfyre, he was unstoppable, especially in his youth. Visenya, his elder sister, was the only one known to match him in combat, as the two of them trained together in their youth.

Aegon was pitiless to his worst enemies, but a reasonable man who accepted the fealty of Torrhen Stark without coming to combat, but proved himself to still be a fierce commander by utilizing all three of his dragons on the Field of Fire. After cementing his reign, he proved himself to be vengeful by wreaking havoc in Dorne after the death of his sister Rhaenys in Dorne - it was reported that Rhaenys was the wife he married out of love, whereas he married Visenya out of duty. Aegon would eventually make terms with Dorne, but it would be over a hundred years after his death that Dorne would truly be accepted into the realm that Aegon forged. He was a recluse and an enigma, never fighting in tournaments and often entrusting the governance of the realm to his great friend Orys Baratheon while he made royal progress through Westeros. This showed some practicality as he knew to keep the good faith of his people while relying on dependable people to keep the Seven Kingdoms together.

Aegon was uncommonly wise as a king, certainly wiser than many of his descendants and undoubtedly wiser than either of his sons. He knew full-well to tread carefully around the Faith of the Seven, who did not take well to either his incestuous relationship with his sisters or the fact that he married both of them. He was accomplished at planning, building the walls of King's Landing and the great septs on Visenya's Hill and later Rhaenys' Hill, the latter of which became known as the Sept of Remembrance. It is worth noting that, while he had many turbulent subjects who missed the old ways, Aegon's reign (apart from the Dornish War) was relatively peaceful, compared to the reigns that soon followed when his sons took the throne. 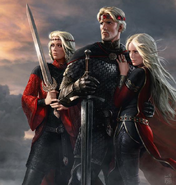 Aegon with his sister-queens Visenya (left) and Rhaenys (right), by Amok © 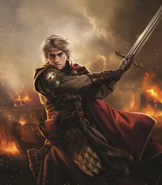 Aegon the Conqueror, by Magali Villeneuve in The World of Ice & Fire

Community content is available under CC-BY-SA unless otherwise noted.